Chrysanthemum means different things depending on the culture it is in. Chrysanthemum is one of the most popular flowers after the Roses, Tulips and Gerberas. Here you will find its description so that you can learn to distinguish them, the meanings of the chrysanthemum and legends around the world, as well as its symbolic variations according to color.

The Chrysanthemum They belong to 30 species of perennials. They are a family of the Atereceaes and have their natural origin in Northwest Asia and Europe. Most of its varieties can reach a meter in length or more, composed of long and strong stems with leafy leaves.

They have a strong aroma and their flowers stand out for their multiple delicate ovoid petals, which grow almost symmetrically and in layers around its pistil center. Most of them can be found in violet or yellowish colors; although they are also cultivated to produce other colors. 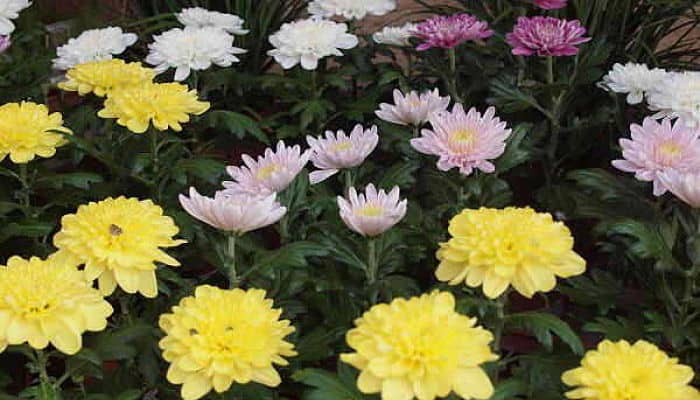 What does chrysanthemum mean in different cultures?

The oldest references to the chrysanthemum come from China and Greece, however it is a flower with great symbolism in other countries, let's see: 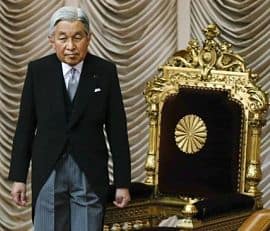 In Japanese the chrysanthemum is known as "Kiku" brought from China approximately in the 8th century, and strongly adopted by the imperial family that imposed it as a symbol of their throne.

It consists of 16 golden petals around the round center that is supposed to represent the emperor as the axis of things. Today the chrysanthemum is the national flower of Japan.

In this country, the chrysanthemum, in addition to representing the imperial house, is also considered the solar flower that promotes happiness and a long life. It is an autumn tradition to celebrate the chrysanthemum festival.

Those who participate make artistic exhibitions of chrysanthemums decorating clothes, sculptures, etc. The most important exponents bring their works to the Meiji Shrine or to Asakusa Kannon Temple in Tokyo where people can contemplate them and enjoy their beauty. 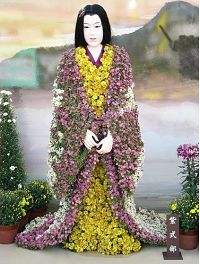 As you already know, the Japanese are the creators of the Hanakotoba or "Language of flowers". Attributing to it the same qualities that its emperor is also supposed to have, that is: Power, Longevity, Balance and Happiness.

On the other hand, its famous ornamental gardens host chrysanthemum plants with real beauty, making the area stand out in a sublime way during the autumn months.

There is also a whole art that uses live chrysanthemums as raw material. Is named Kiku Ningyo (Ser de Crisantemos), the artists make the exhibition of the figures (people or animals) created with chrysanthemums in the autumn festivals. Most of the time showing historical scenes or traditional legends.

What does the chrysanthemum flower mean in China

In China the chrysanthemum is known as "Chu" is generally associated with the humility, austerity, altruism, longevity and wisdom. This is due to the Chinese hermit and poet Tao yuanming whose poems about the chrysanthemum became very popular.

Yuanming was a special man who adopted a life away from society, he dedicated himself to observing nature and living in balance with it.

He was extremely humble and selfless, thus The meaning of the Chrysanthemum in China is directly related to the values ​​of this poet. 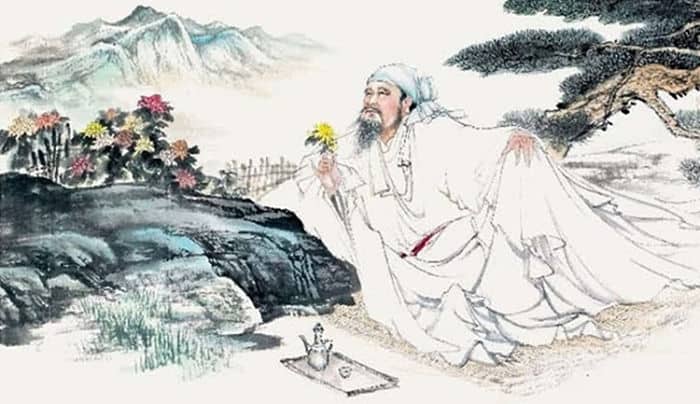 Chrysanthemum is also very popular in Chinese culture thanks to its medicinal properties, it is said that its roots in infusion can cure chronic headaches, in changes its leaves and petals in salads help lower high body temperature.

They also believe that filling the inside of pillows with their dried petals helps improve vision.

In the Feng shui chrysanthemum is used to balance energies or calm intense emotions. It is a symbol of simplicity and perfection and aims to bring happiness and peace to the home.

It is thanks to the Greeks that today we know the Chrysanthemum flower with that name. Its origin comes from the word "Chrysos"Which means gold and"AntemionWhich means flower. Namely "Golden Flower" This is because its shape and color are reminiscent of coins and the sun itself.

German legend about the Chrysanthemum flower

It is said that a long time ago on christmas eve, a peasant named Hermann who lived in the Black Forest of Germany, found a very young boy unconscious in the snow, and feeling sorry for him, he carried him and took him with him to his humble home.

When he arrived, he was received with curiosity by the wife and their children, the children without any selfishness happily shared their humble Christmas dinner with the little newcomer. Before going to sleep the child revealed that his name was Jesus, and the next morning he had disappeared.

When everyone went out to look for him, the farmer found some beautiful chrysanthemums growing right where he had found the boy. The flowers brought prosperity to the family and since then they share their good fortune with a poor boy every year at Christmas. 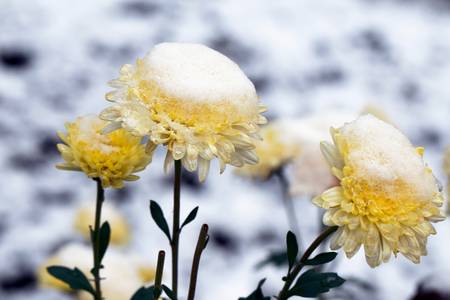 This legend attributes a spiritual meaning to chrysanthemums, which in European regions associate them with Jesus Christ, gratitude, kindness and generosity.

Meaning of Chrysanthemums in the West

Chrysanthemums bloom in autumn. Specifically the weeks before winter starts; which is a rarity in the world of flowers where most open their buds in spring.

This has led to the association of chrysanthemums with the balance, bridge or portal between life and death, heaven and earth.

Chrysanthemums in the West, especially Belgium, Italy and Austria, are used for funeral arrangements or left as an offering on graves. 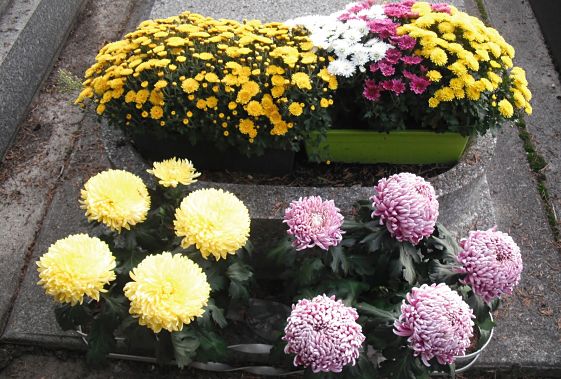 Its relationship with death and longevity has given rise to the tradition of introducing a Chrysanthemum petal in a wine glass to extend life or make it healthier.

Meaning of chrysanthemums according to color

The meaning of the Chrysanthemum flower has different shades, depending on the hue of its petals. Keep this in mind if you want to offer them to a loved one or as a decoration for your home. 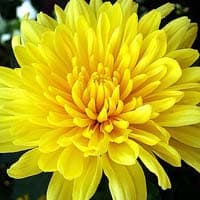 It is the chrysanthemum associated with Sun, the wealth, the generosity and the happiness.

Yellow chrysanthemums are the most cultivated, it is said that they can make you smile and feel satisfaction just looking at them. They are perfect to decorate your home or business with the intention of attracting the prosperity.

What does white Chrysanthemum mean 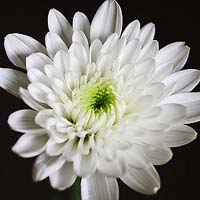 This white flower indicates longevity, and good health. You can give it to sick people with the intention of helping them regain their well-being and vitality.

Some drink the petals of this flower for its supposed power to extend life or make you immortal. But especially the white ones because they are believed to be more pure, perfect and powerful. 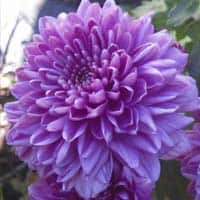 It is associated with funeral arrangements and offerings on graves, said to They have the power to create a link between people in the afterlife and those who remained in the realm of the living. Violet chrysanthemums also indicate deep pain at the loss of a loved one at the hands of death.

Pink chrysanthemums and their meaning 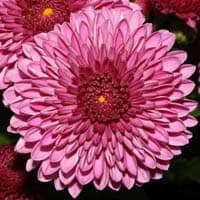 Represents the end of a temporary love relationship. They can be given as gifts to end the relationship in a loving way, indicating that despite the separation, the good times will remain in the memory.

Meaning of the orange or red chrysanthemum flower 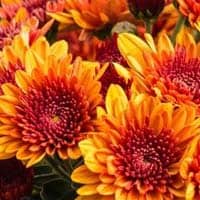 If someone gives an orange chrysanthemum they want to point out the pretense of courtship and delicate or gallant love. It is special for gentlemen who want to gradually earn the honor of the hand of a special woman in marriage.

What do blue chrysanthemums mean 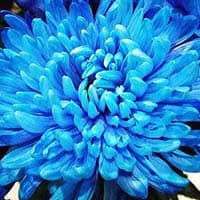 The chrysanthemum is the flower that appears before winter, and tinted blue is a special indication that a person begins to feel coldness in their love relationship. It is a subtle way to end a relationship due to loss of love.

Video of the meaning of Chrysanthemum in Chinese culture

Then we leave you with this video of the meaning of the Chrysanthemum in the East, in this way you will be able to expand the knowledge you have related to the Chinese culture and with what you have been able to discover in this post.

If you liked discovering the meaning of Chrysanthemums, comment your opinion below. We invite you to also learn the symbology of other interesting flowers here. We read 😉